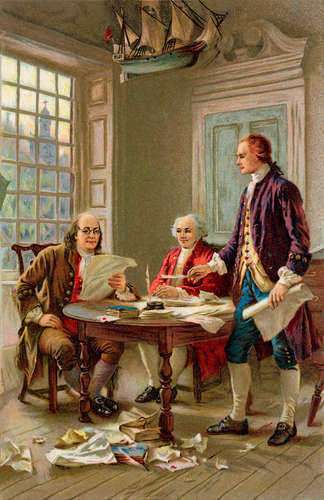 Gouverneur Morris was born on January 31, 1752 in Westchester County, New York. His family was very prominent and well off in New York and had a long record of public service. A gifted scholar, Gouverneur Morris entered King’s College in 1764 at the age of 12 and graduated in 1768. He then received his master’s degree in 1771.

On 8 May 1775, Gouverneur Morris was elected to represent his estate in the New York Provincial Congress. Here, he focused on turning New York into an independent state.

However, his support of independence for the colonies created conflict with him and his family along with his mentor, William Smith, who had given up the patriot cause when it pushed toward independence. Gouverneur Morris was a member of the New York State Assembly between 1777 and 1778.

After the August 1776 Battle of Long Island, the British took New York City and Gouverneur Morris family’s estate across the Harlem River. His mother who was a loyalist gave the estate to the British so the military could use it.

Gouverneur Morris was appointed as a delegate to the Continental Congress, where he took his seat on 28 January 1778. Morris was selected immediately to a committee that coordinating reforms of the military with Washington. After seeing the army encamped at Valley Forge, Morris was so appalled by the troops’ conditions that he started speaking on the behalf of the Continental Army in Congress, and helped enact many reforms for the training, financing, and methods of the army. In 1778, Morris also signed the Articles of Confederation.

In 1779, Morris was not re-elected to Congress, mainly because of his support for a strong central government which was against the decentralist views mostly found in New York. He then moved to Philadelphia, Pennsylvania where he started working as a merchant and a lawyer.

In 1780, Gouverneur Morris’s left leg was shattered and had to be replaced with a wooden peg leg. While he claimed it was due to a carriage accident, there was evidence suggesting that he was involved with a woman and he jumped from a window to escape a jealous husband. Despite his exemption from military duty due to his handicap as well as his service in the legislature, Gouverneur Morris joined a special club for the protection of New York City.

Prior to the Constitutional Convention, was working as a merchant in Philadelphia for some time. After that, he gained an interest in financial affairs and business, so he began to work with Robert Morris, another founding father. Later, George Washington and Robert Morris then recommended Gouverneur for the Constitutional Convention because of it.

In Philadelphia, Gouverneur Morris was appointed the assistant superintendent of finance from 1781 to 1785, and in 1787 was also the Pennsylvania delegate to the Constitutional Convention. Morris moved back to New York in 1788.

Gouverneur Morris believed that any civilized Society would always have an Aristocracy and that the common people were not able of self-government because the poor would sell their votes to the wealthy. Because of this, he felt that voting rights should only be given to property owners. Gouverneur Morris also opposed admitting any new western states on an equal basis with the eastern states that existed, worrying that the interior wilderness could not provide “enlightened” statesmen.

At the Constitutional Constitution, Gouverneur Morris gave more speeches than any other person. He was also categorized as the theistic rationalist since he felt strongly in a guiding god and that morality had to be taught through religion. Regardless, he did not have the patience for any established religion. Gouverneur Morris often strongly defended a person’s right to practice his chosen religion without any interference, and he felt that it had to be included in the Constitution.

Gouverneur Morris went on business in 1789 on business and acted as Minister Plenipotentiary to France between 1792 and 1794. During this time, his diaries chronicled the French Revolution, describing much of the violence and turbulence of the era, as well as discussing his affairs with different women there.

After leaving the United States Senate, Gouverneur Morris served as Chairman of the Erie Canal Commission between 1810 and 1813. The Erie Canal helped define New York City as the financial capital of the country.

On November 16, 1816, Gouverneur Morris died after sticking whalebone through his urinary tract in order to relieve a blockage. He passed away at the family estate, called Morrisania, and was buried in New York City at St. Ann’s Church.

• The S.S. Gouverneur Morris was a United States liberty ship that was launched in 1943. It was finally scrapped in 1974. 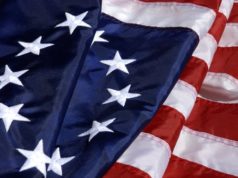