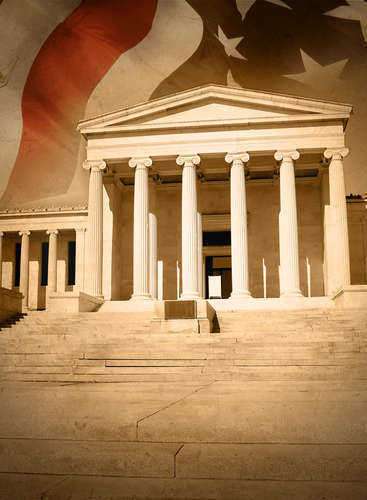 The Enabling Act of 1933 was passed by the Reichstag party of Germany and signed by President Paul Von Hindenburg. The legislation represented the second major (the first was the Reichstag Fire Decree) step in Hitler’s rise to power.

Chancellor Adolf Hitler, through the passing of the Enabling Act, obtained plenary powers and legally established his dictatorship. The Enabling Act, as its name suggest, allowed Hitler to assume control of the government and vaulted him into a position of unquestioned power. The Enabling Act granted Hitler’s party to enact laws without the direct participation of the Reichstag.

Background of the Enabling Act:

After Hitler was appointed chancellor of Germany in January of 1933, he asked President Hindenburg to do away with the Reichstag. An election was scheduled for March of 1933 to uphold the democratic government in Germany; however, six days prior an arson attack on the Reichstag building in Berlin officially dissolved the government and was viewed as a pivotal step towards the establishment of the Nazi regime.

The burning of the Reichstag building was the overwhelming symbol for the beginning of the Nazi revolution. The attack gave way to the Reichstag Fire Decree, which definitely suspended habeas corpus rights and an assortment of civil liberties. Hitler used this decree to raid various government offices (including the Communist Party Offices) to effectively eliminate all political counterparties.

Voting on the Enabling Act:

Although the Nazi party (NSDAP) received a substantial amount of votes, they failed to win an absolute majority in parliament—52 seats were won by the party’s coalition partner, the German National People’s Party. This slim majority was not sought by Hitler, who immediately freed himself from the National Party’s dependency, by forcing the cabinet to draft the initial legislation for the Enabling Act. This proposal would shift legislative power from the Reichstag and its parties to the cabinet for a period of four years. The Nazis drafted the Enabling Act to gain complete political dominance, without the support of a majority in the Reichstag and without the need to include or bargain with their coalition parties.

The Rules Enabling Act allowed Hitler’s cabinet to draft and subsequently enact legislation, including all laws that deviated from or effectively reformed the nation’s constitution. These abilities were thus transferred to Hitler without the need for consent of the Reichstag. Because the Enabling Act allowed the party to depart from the nation’s constitution, it was itself considered a constitutional amendment and as such, its formal adoption required a two-thirds majority vote.

The Enabling act was originally thought to be struck-down by the Communists and the Social Democrats; however, Hitler’s government had all Communist and the majority of Social Democrats arrested under the Reichstag Fire Decree. This elimination of the opposition and Hitler’s influence over the Centre Party was enough to receive the two-thirds majority vote.

Although the enabling act was eventually passed, Hitler’s negotiations with the Centre Party was tenuous—Hitler talked with the Ludwig Kass, the Centre Party’s Chairman, and guaranteed the protection of religious liberties and the retention of civil workers affiliated with the party. On the day of the vote, debate within the Centre Party emerged—Kaas advocated voting in favor of the act, referring to the written agreement from Hitler, while other party leaders called for a rejection of the Enabling Act. The Centre Party ultimately sided with Kaas.

The remaining Social Democrats planned to obstruct the passing of the Enabling Act by boycotting the Reichstag session. This boycott would render the gathering short of the two-thirds vote that was mandatory for constitutional amendments. The Reichstag; however, changed its rules of procedure and allowed the President to declare any absent deputy to be considered as present. Because of this change, the Social Democrats were obliged to attend the meeting and committed by voting against the Act.

Later in the day, the Reichstag gathered under intimidating circumstances—Hitler’s troops swarmed the chambers. At this time, the majority of party leaders supported the bill, and those that didn’t were intimidated by SA troops to do so. When the vote was finalized, all parties except the Social Democrats favored the passing of the Enabling Act.

Consequences of the Enabling Act:

According to the rules enabling act, the government possessed the authority to pass laws without parliamentary consent. This shift of power was unprecedented; for the first time, laws could deviate from the nation’s Constitution. The Act, thus, eliminated the Reichstag as an influence in German politics. Combined with the Reichstag Fire Decree (documents that curtailed civil liberties and transferred powers to the Reich Government) the rules enabling act transformed Hitler’s governing body into a full-fledged dictatorship.

Although the rules enabling act gave legislative powers to the government, this authority was exercised predominantly by Hitler himself. The passing of the rules enabling act reduced the Reichstag to a mere platform for which Hitler could orate. The Reichstag was a shell; it met only a handful of times until the end of the Second World War and enacted only a few meaningless laws. Within months after the passing of the Enabling Act of 1933, all parties except the Nazi regime were eliminated or pressured into dissolving themselves.

The Enabling Act was renewed in 1937 and 1941. In 1942, Hitler was given the power of life and death over every German citizen.

Specific Articles of the Enabling Act:

The Enabling Act was enacted by the Reichstag party and is divided into the following articles:

Article 1 of the Enabling Act: The opening article of the rules enabling act stated that in addition to the process prescribed by Germany’s constitution, laws of the Reich may also be enacted by the governing body of the Reich. This provision includes all laws referred to by Article 85 Paragraph 2 and Article 87 of the nation’s Constitution.

Article 2 of the Enabling Act: The second act of the rules enabling act stated that government may deviate from the nation’s constitution as long as the deviation does not affect the institutions of the German government and the Reichstrat. Through this article, the president or ruler’s powers and rights remain unaltered.

Article 5 of the Enabling Acts: This portion of the rules enabling act states that any law passed by the government takes effect during the day of its proclamation. The law will then lose its force on April 1st of 1937 (4 years after it is passed) or if the present government is replaced.

Text of the Enabling Act:

The Reichstag has passed the following law, which is, with the approval of the Reichsrat, herewith promulgated, after it has been established that it meets the requirements for legislation altering the Constitution.

Article 1. National laws can be enacted by the Reich Cabinet as well as in accordance with the procedure established in the Constitution. This also applies to the laws referred to in Article 85, Paragraph 2, and Article 87 of the Constitution.

Article 2. The national laws enacted by the Reich Cabinet may deviate from the Constitution as long as they do not affect the position of the Reichstag and the Reichsrat. The powers of the President remain undisturbed.

Article 4. Treaties of the Reich with foreign states which concern matters of national legislation do not require the consent of the bodies participating in legislation. The Reich Cabinet is empowered to issue the necessary provisions for the implementation of these treaties.

Article 5. This law becomes effective on the day of its publication. It becomes invalid on April 1, 1937; it also becomes invalid if the present Reich Cabinet is replaced by another.

Reich Minister of the Interior Frick

Source of English translation: Law to Remove the Distress of the People and the Reich (Enabling Act); reprinted in U.S. Department of State, Division of European Affairs, National Socialism. Basic Principles, their Application by the Nazi Party’s Foreign Organizations, and the Use of Germans Abroad for Nazi Aims. Washington, DC: United States Government Printing Office, 1943, Appendix, Document 11, pp. 217-18. (Translation edited by GHI staff.)