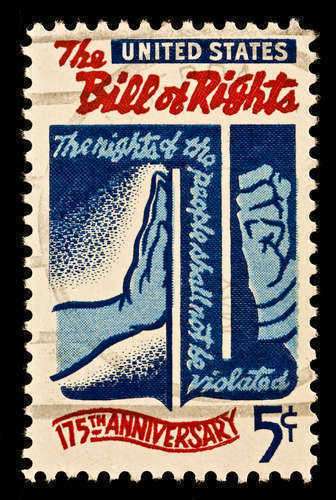 Known as the Bill of Rights, the first 10 Amendments to the United States Constitution were officially ratified in 1791. The Bill of Rights offered American citizens undeniable rights, essential for maintaining a free country.

The liberties offered in the Constitution ensured Americans that the central government would not abuse its power through tyranny or unjust actions. The Bill of Rights also offered the ability to express opinions and thought freely without the fear of government persecution.

Written by James Madison, the first 10 Amendments in the United States Constitution were originally met with skepticism. Led by Alexander Hamilton, the anti-Federalist party believed that the inclusion of individual rights into the Constitution was redundant and frivolous.

The Bill of Rights was adopted 3 years from the original drafting of the United States Constitution. Considering the historical implications, the process to include the Bill of Rights into the Constitution was fairly quick. However, the influences upon which it was built stem back centuries prior.

After the United States won the Revolutionary War and subsequently earned its freedom, the adoption of a Constitution was necessary for establishment purposes. The Revolution was spawned through injustice enforced by the controlling British Government. American settlers grew embittered from constant taxes and wrongful convictions.

Although the Bill of Rights was created to free Americans from a powerful central government, its influences, ironically, stem from British doctrines and literature. The following are three substantial precursors which influenced the adoption of the Bill of Rights into the United States Constitution:

In 1215, tired of immoral taxing and arbitrary actions committed by the King, a group of English noblemen forced King John to sign the Magna Carta. The legendary doctrine guaranteed common citizens such fundamental rights as the government must be fair and reasonable with their actions; individuals are guaranteed a trial by jury and due process of law.

The basic rights offered in the Magna Carta originally were awarded solely to noblemen. However, the rights were eventually extended to all people of society. The Magna Carta diminished a Monarch’s absolute power and enabled all citizens basic rights which impede tyrannous actions.

The Magna Carta is still recognized as an initial breakthrough for common citizens in regard to limiting governmental powers. Like all civil codes, the United States Constitution used the Magna Carta as a foundation upon which to build.

Although the Magna Carta officially limited the powers of the Monarchy, it was often by the King and his unjust policies. As citizens grew furious over the Monarchy, the Parliament, or the English legislature grew in influence. Parliament eventually refused the approval of more taxes issued by King Charles I and forced him to sign the Petition of Right which prohibited the government from unlawfully arresting people and housing troops in private homes without consent from the owner. This petition clearly influenced the Third Amendment (prohibited soldiers from quartering on an individual’s private property) and the Fifth Amendment to the United States constitution.

This document guaranteed all British subjects the right to bear arms and petition the King. This British version of the Bill of Rights also protected citizens from excessive bails, fines, and cruel and unusual punishment. The British version protected far fewer rights than the American Bill of Rights. However, the United States Constitution clearly adopted provisions (protections against excessive fines, punishments, and bails) found in the 8th Amendment, as well as a direct adoption of the 2nd Amendment (right to bear arms.)

Amendments and provisions of the Bill of Rights were undoubtedly adopted through British doctrine. However, a slew of domestic individual liberties existed before the ratification of the United States Constitution. Before the creation of the English Bill of Rights, many colonies recognized individual liberties through their own constitutions. For instance, in 1636, Rhode Island established itself as the first colony to recognize freedom of consciousness. In 1641, Massachusetts created the Massachusetts Body of Liberties which detailed a list of protected rights for the individual colonist. In 149, Maryland extended the right to practice any religion.